CHRIS DAHL: from a High School dropout to PhD in Entomology. 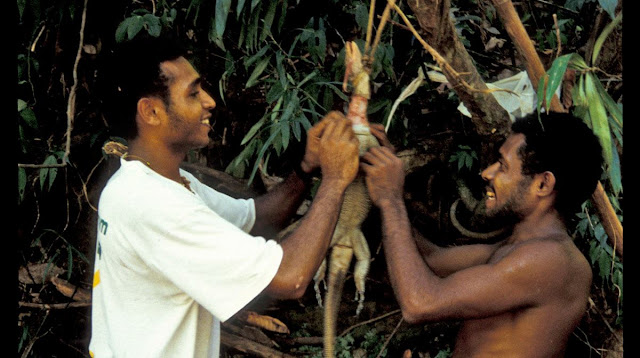 When I landed for the first time in Papua New Guinea, in May 1995, I was picked up at the Madang airport by my friend and colleague Yves Basset. He arrived in a Landcruiser driven by his newly recruited young assistant, Chris Dahl, who had just dropped out of secondary school because his family could not support his studies.

Chris was thus the first PNGnean I had a conversation with, and that later extended in a lot of joint research we have done in PNG. Unfortunately, coming from a farming village family and with his education interrupted at grade 10, the odds were clearly stacked against Chris ever becoming a scientist. However, he never seemed to fully appreciate how hopeless was his situation.

Over the years of hard field and laboratory work, he has became a skilled research technician working on insects while also completing secondary school, studying in evenings for distant education programme. Years later, he was admitted to the University of PNG and completed BSc in Biology. He did his Hons thesis with the Wildlife Conservation Society, where he was trained by Steve Richards in amphibians, wanting to broaden his expertise from insects.

Chris later returned to Madang to our New Guinea Binatang Research Center and completed MSc there (while enrolled at the University of PNG), again on frogs, publishing research papers and having a newly discovered frog species named after him. Finally, he could join our team in the Czech Republic to go through with his dream of doing a PhD. This time he turned back to entomology, with Yves and me as his supervisors.

Yesterday, after six years of work that included field studies in PNG, Panama and Thailand, as well as several research papers, he was awarded a PhD in Entomology. Very few PhD students had to overcome such formidable obstacles on their career path towards biology as Chris has done. I am sure he will be an inspiration to many young people in PNG who are facing seemingly insurmountable difficutlies in pursuing their life aspirations and his story would encourage them not to give up. I wish Chris (left in the photo from 1996) all the best in his further research career!