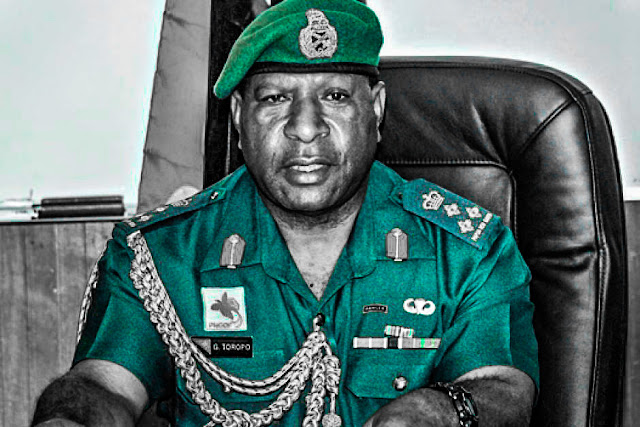 This is very serious and we call upon PMJM, Deputy Steven Davies and Minister Wera Mori immediate intervention before it goes out of hand

The seriousness of the current PNGDF Recruiting debacle, which is just another example of how bad things have become within the Force while BG Toropo continues to hang around.

Of the 320 Recruits now up at Goldie Recruit Training Depot, 253 are Highlanders, 37 Momase, 16 NGI and 14 Southern. Although the Recruiting Age limit is 24, many of the recruits are over age, either using someone else's certificates or bribing their way in. The huge imbalance in regional recruitment has happened through the influence of BG Toropo and his cronies command who are attempting to prepare for the 2022 General Selection.

This is absolutely disgusting and has never happened before in our history. The PNGDF represents the whole nation and the makeup is not based on ethnic population proportion but on equal representation from each region.

Since Independence, the PNGDF has always endeavoured to ensure that we recruit equally from each region. BG Toropo has thrown this out of the window and deliberately flooding the PNGDF with people from his region.

A 47-year-old Highlands Recruit is currently at the Goldie Regimental Aid Post, he started vomiting blood during training. When interviewed by an officer, the man said he actually had Liver and Kidney problems due to alcohol, and he cannot continue with the vigorous, training. He also told the officer he had spoken to Commander Toropo, informing him he was going to quit. He even told the Medic Officer at Murray Barracks to passed him during recruiting medical checks (name of medic to be confirmed).

The 47-year-old attempt to bribe the officer with money by asking if he could bring in another person from his region to take over his place. The officer walked away and refuse outrightly to accept the man’s bribe.

In addition, the officer says the Goldie Recruit Company has been ordered to graduate all 320 of these new recruits regardless of whether they meet the standards or not or whatever the reason may be.

This is disgusting and a threat to our beloved organisation and nation. Have asked A/CDI to investigate and report his findings to the appropriate people who can do something to stop this madness.

On page 13 of yesterday's (Tue) National, Minister Wera Mori announced his disgust and suggested the Australian Defence Force to take over in recruiting for the PNGDF!!!

If BG Toropo continues to hang on, we will witness further degradation of our core values. He is setting a disgraceful example for our young officers and troops. The rank and file witnessed what's going on and are fed up. Soon they will be influenced too!