JUSTIN DID NOT DO IT ALONE! 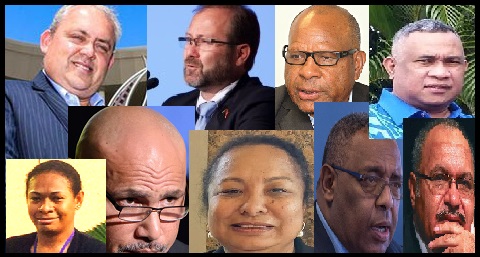 APEC Thieves met with O'Neill and are modifying the report to cover up their stealing. PNG people must know that public servants are plotting with the old regime to overthrow Marape Steven Government.
On Friday the 24th of January, 2020 APEC staff mostly public servants and beneficiaries of the stolen monies plan to meet Peter Oneil at the VIP Lounge on the 8th Floor of Crown Hotel, Port Moresby at a WEIRD time of 10.49PM late into the nite. VIP lounge was closed to guests in preparation for that secretive meeting.

The people involved are :

The Prime Minister must have rejected the APEC report submitted earlier and the group hired two TOP auditors to severely modify the report to COVER UP THE MISSING AND STOLEN MONIES so they can bury their guilt. All these people spent over K2 billion kina. They bought themselves properties with these funds. Check the records and you will find their properties were acquired in 2018 and 2019 windfall years.

These public servants must be sacked immediately

They call Peter O'Neil PM and they report to him on a daily basis when Marape is the new PM 9 months ago; they are plotting to remove Marape,

PM, you know these people very well, many pretend to be your friends, when they are back stabbing you. You mangi Hela ya, know your enemies and rule the line.

People of PNG are happy that the corrupt dictator and regime is gone and now history, but the few corrupt public servants who embezzled funds and some MPs think PO will return

Sack these bastards! Do not accept the MODIFIED APEC REPORT and CALL FOR A COMMISSION OF INQUIRY INTO APEC.