The list outlined the amount he and his wantoks being paid by DOD. All of them have been engaged on short term contracts. Its mind boggling as those positions are NOT inline with the DOD manning. It was done for his own conveniency to facilitate the milking of the Org.

Honestly speaking, its so sad but thanks to our PMJM for appointing his former Campaign Manager as the DF Secretary so he can plunder the Org as he wishes. His apointment leaves alot to be desired.

The DF Secretary then appoint or got some of his wantoks, tribesmen and mates on a short-term contract in the Department on an exorbitant salaries, most notable is the former Rugby player namely Larson Marabe as his 'contract officer'. Does the name sound familar?

There must be some hidden connotaction to these two gentlemen. There was never a position for such previously, it was only created by the DF, Secretary soon after his appointment. Sounds interesting, isn't it?

So what is the purpose of his appointment then? To returned thanks for being his (PM) Campaign Manager, and at same appreciating the PM for appointing him the DF Secretary in a silver platter.

Is this PMJM favourite slogan of 'Taking Back PNG' by appointing his close relative as the DF Secretary?
The DF Org is in shambles and Service Personnels are very furious of whats happening.They are not in a position to speak out right now unless they (Akipe and his tribesmen) crossed over the red line, then they will expose everything.

Nothing has change so far since his appointment to date. He and his mobs continue to abuse the processes and ripped the DF Funds at their whims.

There is NO money for the soldiers;
1. Annual Recreational Leave payments (ARL),
2. NO money for soldiers outstanding allowances,
3. NO money for the accumulative various bills to effectively do the primary tasks etc, but there is money for their corrupt practices to hired cars and others. Is that their ethnic DF personal coffers?

Is this your idea /way of Taking Back PNG Mr. Prime Minister?

The DF Secretary gave no priority or responsibility to his mandated duties for the welfare of the soldiers but see fit to spend on their entitlement funds to hired cars. He don't need a hire car, he is already provided with an official vehicle as part of his contract. It is also a public knowledge that he made a deal with his mate, another DF Officer from Simbu who is related to him for a long term usage of his vehicle. Interestingly, he is not using the vehicle but maintaining it as his support vehicle on a long term hire. So just imagine the bill. The officer collects his cheque every month. Obviously someone becoming rich at the expense of the soldiers. How interesting is that? Maybe the Commander also needs to look into that.

It's becoming too obvious DF has now become a milking cow for them. When will this ethnic ripping of State Funds stop? This warrant an urgent intervention and investigation. 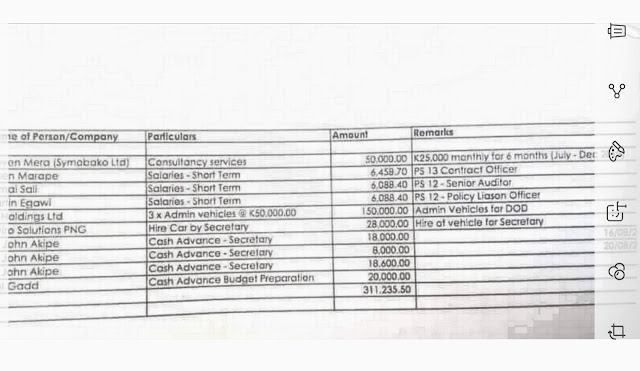