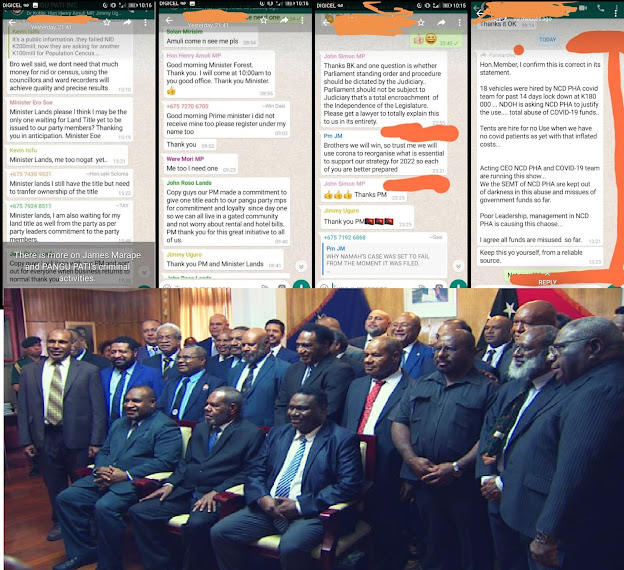 by KEVIN KEREPO
PNG CITIZENS AND BUSINESSES TO STAGE  PROTEST UNTIL JAMES MARAPE IS REMOVED AS PRIME MINISTER OF PAPUA NEW GUINEA.
James Marape is setting the stage for stealing public funds using the public Health Emergency Act 2020. He wants to use COVID 19 to pursue his political dream at the cost of massive debts and unscrupulous spending.
This law is already defective and unconstitutional and threatens all accountability process. It was deceitfully passed in Parliament without proper consultation and will not work for our country.
He has intentionally removed all accountability provisions to hijack public funds in the new law. Now he is bringing in loan money up to a billion and preparing the embezzlement process.
People of Papua New Guinea must stand up and remove this most highly corrupt government.
This government has killed all our Small and Medium Enterprises. This government has put people out of jobs. This government has forced prostitution into families. This government has stopped the worshipping of our God. This government is satanic. This government is killing our people.
Remember James Marape never won Tari Pori election in 2017. He stole the mandate. He is the same person who stole K33 million Kina from Hela Transitional Authority. He is more corrupt. He is a womaniser, gambler and uses Church as a conduit.
Pass this message to all Papua New Guineans that we will move with all our strength to protest until the corrupt James Marape government is removed by the people's power.
All public do not let this man continue with his evil intentions. This is not his village. This is not his tribe. This is not Tari Pori. We are PNG.
He cannot deceive our citizens. A corrupt Prime Minister with his corrupt ministers and members of Parliament cannot bring injustice and suffering to our people.
We call on PNGTUC and all other Unions to start the discussions. We call on all Churches and Non-Government Organisation to support this call.
We call on all businesses who have suffered under this national scam to stand behind this fight.
We call upon all student leaders and Ward  Councillors with Women and Youth Groups to start the discussion and align our people.
We call upon the Ombudsman Commission to take the lead in removing this very irresponsible government and their dim-witted intention.
We call upon all our disciplinary forces to see this evil seed being planted by our leaders and support the public.
We call upon the judiciary to administer correctness and support this critical move. The people's future has gone to the dogs.
We call upon all heads of foreign governments and representatives of the diplomatic mission to support this public outcry and remove this evil government.
This country is FED up of lies and deceitful leadership using Parliamentary and executive powers to steal people's money.
ENOUGH IS ENOUGH. STOP THIS GOVERNMENT FROM STEALING INTO BILLIONS. JAMES MARAPE MUST BE REMOVED NOW BY THE PEOPLE. HE IS A THREAT TO OUR FUTURE.
ADVICE ALL CITIZENS TO RISE UP AGAINST THESE THIEVES WHO ARE DELIBERATELY USING COVID 19 TO ENRICH THEMSELVES.