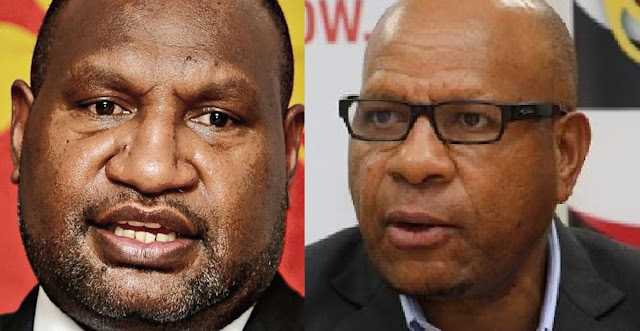 CABAL REASSERTS CONTROL OF KEY STATE AGENCIES.
by JOHN ENDEMONGO KUA
It wasn't a surprise to read about the acquittal of the controversial private lawyer - who before his brush with the law had operated the largest legal outfit troughout the nation on engagement by the state to provide pro bono or free legal services to state remandees trough out the nation.

Prior to his arrest he was the envy of the prestigious legal profession for having had the determination and foresight to provide a necessary service the state government was unable to provide for its citizens as it just didn't have the capacity to provide the services through its department of justice.

For a while it was serving the needs of the people and the government was quite happy with the legal firm was doing until greed came along to use the legal services to draw out extra money.

Police obtained a letter which was purported to be signed by the former prime minister authorising the outstanding legal bills of more than K80 million .

Police acted on the complainant to arrest the principal of the law firm and charge him for conspiracy to defraud the state.

Furthermore they had obtained an arrest warrant for the former prime minister for having authorised an illegal payment based on the information that there was no proper engagement of the legal firm and that the claims for payment were mostly false.

The former prime minister had spent almost K100 million of public funds to stay the arrest warrant using foreign lawyers to keep him out of facing the court.

The former police commissioner had done the illegal and unthinkable in locking down the Fraud and Anti Corruption Directorate in Konedobu and attempted to arrest the Director - Detective Inspector Matthew Damaru.

Police were divided on the issue and rogue officers had threatened members of the special units assigned to investigate the prime minister and officials in relation to the alleged illegal payments.

After seven years and hundreds of millions spent in relation to the case one single magistrate ends the matter with the single stroke of the hammer citing - abuse of process .

That was the most expensive decision made by a single magistrate after the state had spent more than K100 million on the case and if it is not overturned by the office of the public prosecutor the state might compensate the law firm for damages which may amount to hundreds of millions.

The decision to throw out the case by the committal court magistrate may not be acceptable by the concerned public at large and will pressure the appropriate authorities to review this matter but it demonstrates glaringly that the cabal set up by the O'Neill regime is fighting back to regain political power.

Prime Minister James Marape has done the right thing so far in setting up the commission of inquiry against the former prime minister in the UBS - OIL SEARCH saga , and has introduced the whistle blower act and the ICAC bill and finally booting O'Neill and his party members out of the government benches into the opposition but he will need to chop the cabal or he will be out sooner than he thinks.

The decision by committal court magistrate Ernest Wilmot is nothing short of sabotage with intention to pervert the course of justice and should be investigated and charged accordingly.