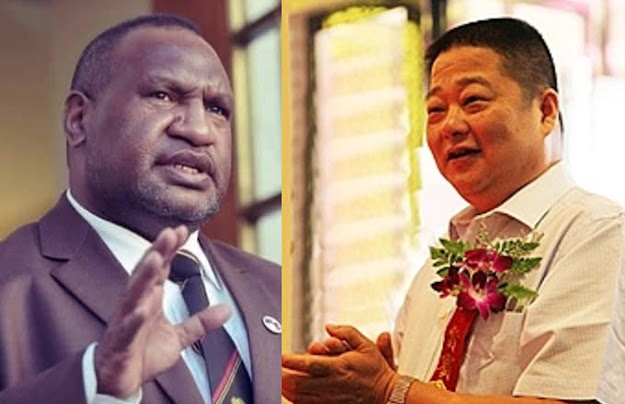 by GOVERNMENT INSIDER
Timing more than suspicious for Marape flying off to Lae after meeting Chines Tycoon with Cash.
Mr Mailin's visit to PNG wasn't a favorable one for him I guess. Just few hours after his arrival, news of him sneaking into the country stormed the social media raising eyebrows. Chen Mailin is no stranger to making media headlines as he is one of Chinese Billionaires that has investment around the world.
Chen is a former member of the Chinese government’s top advisory body, the Chinese People’s Political Consultative Conference (CPPCC)
He travels with cash wherever he goes on the surface of this planet. He has a very bad track record of bribery with governments in terms of finding favor and achieving what he is after. Mr Mailin's visit to PNG in such a time should be questioned and investigated when all protocols were broken
to allow a particular plane to enter the country from a corona-virus infested nation.

Mr Mailin flew into the country with cash from a reliable source in Marape's Government. From the insider the bags of cash were given to the Marape government in exchange for our Mines that are put on hold. Either it be Pogera or Wafi Golpu we don't know with both mines still kept in suspense over their decisions.

Marape took a flight off to Lae this morning after receiving a huge sum of money. PMs going to Lae makes it more suspicious and also it confirms the movement of money to the Pangu base and Wafi Golpu area. From inside source it is more likely that Marape/ Steven government is targeting Newcrest ( Wafi Golpu). It is understood that Marape's visit was a last minute decision and not made clear.

The Prime Minister's visit to Morobe came after he received the flight from China safe and sound on PNG soil. After receiving the flight Marape and Rainbo Paita his briefcase carrier left for Lae. Their visit is to serve Mr Mailins interests on suspended gold mines in the country.

The ball is in Marape's court to decide which mine to give to his Chines business partner. In few weeks to come we will see decisions made. All decisions will be made to serve the foreigners and their interests on our resources.