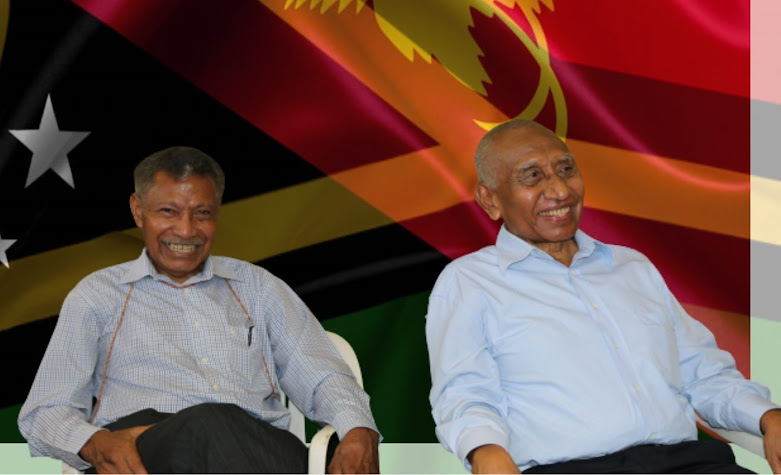 40 year’s ago, on this day, July 30th 1980, heroes were made, after Papua New Guinea’s Defence force single handedly and strategically over threw a rebellion in Vanuatu on Espiritu Santo Island.
New Hebrides as it was known then was a condominium ruled by Colonial powers French and Britain in the eighteenth century shortly after the arrival of Captain James Cook. In 1975 they created a joint administration of both local and European officials, and some powers were devolved to an elected assembly. However, as independence approached, there was an armed uprising against the plans and a bid for secession on Espiritu Santo Island, led by Jimmy Stevens, a nationalist and politician. Stevens was the leader of what they called the Nagriamel movement. He had declared the independence of Espiritu Santo and apparently started to refer to himself as Prime Minister.
The New Hebrides government solicited support from Britain and France, asking for troops to be sent in to put an end to the armed rebellion but France did not want the United Kingdom to deploy troops. Even Australia and New Zealand did not want to interfere due to their relationships with the British and French Governments.
With no where else to turn to Prime Minister elect Walter Lini looked to Melanesian brother and then Prime Minister of Papua New Guinea Sir Julius Chan for help. In his book playing the game Sir J recalls, “ We had planned to attend the South Pacific Forum meeting in Kiribati. I was flying in on the government aircraft, so I asked the commander of the PNG Defence Force ( PNGDF ), Ted Diro, to come with me and join the discussion.”
General Diro was sent to determine the situation on the ground and later gave his military advice to Sir J. From his advice a planned execution to take back Espiritu Santo from the rebel forces and the strong French presence was set into motion. The Kumul Force launched Operation Wantok Durua ( Halivim Wantok ).
On August 5, the National Parliament met in a special sitting (in the old Parliament House in town) to debate the deployment of troops. Only two members from that Parliament remain in office — Prime Minister Sir Michael Somare who was then Opposition leader and Member for Bouganville Regional John Momis, who was the Minister for Decentralization in the Chan/Okuk government. Sir Tore Lokoloko was the Governor General at the time.
Sir Michael was opposed to the deployment. He told Parliament the Defence Force had acted illegally in sending troops overseas without Parliament’s approval.
"These troops are there now. They are sitting in Vanuatu. They are already practicing operational manoeuvres," Sir Michael said. "They are there despite the National Constitution saying quite clearly prior approval of Parliament must be given."

Defence Minister Gerega Pepena told Parliament the initial deployment of 300 troops to restore law and order in Vanuatu would cost K750,000.
After three days of heated debate, Parliament voted 55 to 40 to send our troops on their first overseas assignment.

That was 40 year’s ago today. A successful story for Papua New Guinea and one that current New Ireland Governor Sir Julius Chan holds at the pinnacle of many of his political achievements. The New Ireland Government Media Unit as a matter of courtesy to an old friend was asked by Sir J to call retired General Ted Diro yesterday ( Wednesday 29th July, 2020) and ask him about his thoughts on Vanuatu as the Pacific neighbour celebrates its 40th Independence. He for the first time revealed some of the more intricate details of how he led PNG’s jungle fighter’s to victory without losing one single soldier.
“ I attribute the victory in Vanuatu to Sir Julius Chan only. We were just the soldiers doing our job. Without him being at the helm of Papua New Guinea at that time we would have failed Vanuatu.
“We had to prepare to free up Espiritu Santo Island. So that the country could be united under one umbrella and one country. That was our task but the propaganda was so strong and to make matters worse the white American association was supporting the French. So, we were expecting a much bigger fight then what we got,” said General Diro.
Espiritu Santo Island located North of Vanuatu is the richest and the most agriculturally productive part of the country. Earning more export then the other Islands. Which was one of the main reasons why the rebels and the French still wanted control over it.

But the concept was PNG made and was reintroduced again when Sir J was PNG PM. Appointed Troops were drawn from Australia, New Zealand, Tonga, Vanuatu and Fiji to bring peace to Bougainville. The force was deployed between 4th and 21st of October 1994 before being withdrawn. Further peacekeeping troops were deployed to the island of Bougainville in 1997 as part of the Truce Monitoring Group.