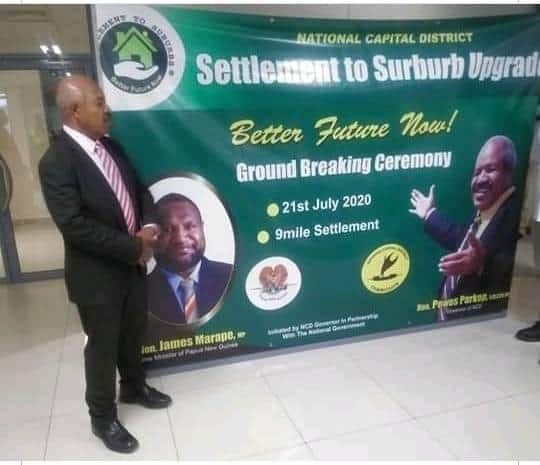 ▪️Instead of converting 8 Mile Settlement into a suburb as promised prior to the 2017 elections, Pakop as the Chairman of the NCDC Planning Board APPROVED development plans from Malaysians and Chinese business owners who have now moved into the front of Block 1 / Zone 1 of 8 Mile Settlement, and as a consequence Settlers were forcefully evicted to make way for these Asian business syndicates. What hypocracy is this for the former Human Rights Lawyer to allow this to happen to the Settlers? Don't they have basic human rights? Pakop tricked and fooled the 8 Mile Settlers for their votes in the 2017 national general elections! He uses people very well!

▪️Pakop is smart - he uses Highlanders in NCD to serve his own personal & political agenda.

▪️Today, I heard Pakop invited our current Prime Minister James Marape to the Ground Breaking ceremony of the 9 Mile Settlement to Suburb Upgrade. Trust me - this is a con - it will never materialise just like the fake promises to the 8 Mile Settlers! Pakop does not even have a bloody clue on how to design & build a suburb. He'll give that job to Phoenix Construction for sure!

▪️ Currently the Marape-Steven Government does NOT have a policy to upgrade Settlements to Suburbs in cities like Lae, Mt Hagen, never mind Port Moresby. You do ground breaking ceremonies based on current government policies.

▪️You have set the precedence with 8 Mile Settlement - you are conning the voters of NCD - this is a 2022 election gimmick. Call it 'early campaign' if you wish to!

▪️As the Chairman of NCD Planning Board, Powes Pakop has the authority to approve all Development Plans within NCD as far as planning approvals are concerned. That is a fact.

▪️Pakop should stop this cargo cult mentality. Under the pretext of upgrading the Settlements to Suburbs, you are promising the settlers that you will give them Land Titles! Legally this is impossible and you know it. Stop the lies! You are NOT the Lands Minister or the Chairman of the Land Board.