Happy Independence Hela.
James Marape is the biggest liar, betrayer and hypocrite of all time.
He is the definition of a wolf in sheep's skin.
He was PNC, part of PNC and served as the longest serving Finance Minister for seven (7) consecutive years in the PNC Party government.
He resigned from PNC Party and lied to this country and her people that he didn’t want to be part of a corrupt O’Neill government. However, to date he has not produced one single evidence and or laid one single complaint with Ombudsman Commission or Police National Fraud and Anti Corruption Directorate on his claims.
He was never genuine from the start. He said he only wanted to remove O’Neill and never wanted to be PM. However, in Laguna camp, he forced himself by putting his name down on VONC Motion Paper has the candidate for PM hoping that he will attract the numbers. Needless to say, he never attracted numbers and so fall short of the required majority (magic number) which is 56 MPs.
In failing his bid, he then went to lure William Duma, and wilfully lied to him by offering him PM position by signing a one page agreement. Both James Marape and William Powi prayed over that agreement in the presence of Patrick Puraitch and Governor Sasindran Muthuvel at around 3am in Governor Muthuvel’s residence in Waigani Heights.
Sad to say, as soon as William Duma and his URP moved to Laguna Camp, James Marape backflipped on his own agreement with Duma. We then had a stalemate in Laguna Camp which resulted in a secret ballot on the 28th of May 2019. The result of the secret ballot is of course a public knowledge now in the country. However, for the record, James Marape was defeated by Patrick Puraitch with the result ( Puraitch 37 and Marape 28). Marape then prayed over the result and accepted defeat and endorsed Patrick as the candidate for PM.
Everyone of us in the Laguna camp thought that all was well and good. Little did we know that this untrustworthy, selfless and greedy Tari man was graving for power and wealth and using God’s Name in vain to pursue his course.
On the evening of the 28th of May 2019, Marape and Powi met up with Michael Nali who then brought them to meet Peter O’Neill. In his meeting with Peter O’Neill, Marape cried so bitterly and asked Peter O’Neill to forgive him as a Hela and Southern Highlands brother. Again, sad to say, as we know today, he was not crying to say sorry to Peter O’Neill but rather crying to Peter O’Neill to give him the prime ministership.
Simply put, James Marape betrayed and backstabbed everyone at the Laguna camp and went back to Crown hotel when he lost to Patrick Puraitch through a secret ballot and got mandate from PNC to become PM.
So he did not only betrayed and backstabbed everyone at Laguna camp but he also betrayed and backstabbed PNC Party and the Crown hotel camp and many other people.
And now on the eve of his 1st anniversary as PM he sacks the very Party (PNC) that he went and begged and cried to and made him PM.
It should now be very clear in everyone’s mind that James Marape deserted PNC Party for his own selfishness, greed and hunger for power and wealth of this world.
In conclusion, James Marape is someone who cannot and can NEVER be trusted even if he prays over his commitment to you. He is the most untrustworthiness guy I have ever known.
GOD HELP THIS COUNTRY UNDER JAMES MARAPE’s CORRUPT AND UNTRUSTWORTHY LEADERSHIP 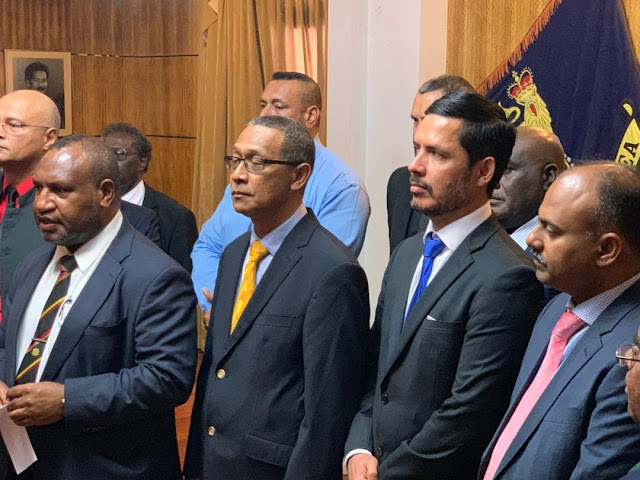