“Dominic Terupo and Morgan Mogu are errand boys, they drive, move cargo and clean up, they have no idea about the type and value of the concealed cargo (cocaine) they were dealing with. They work for cash, their names are not mentioned in any of the conversations we have been watching. They are generally referred as “village people”. They are wrongfully arrested and convicted by Judge Paul Tusais, the organisers of the “Kambang” (cocaine) are at large”.

Police investigators, operating independent of the one headed by Deputy Commissioner of Police (DCP operations), Donald Yamasombi said they have intercepted and collated “digital evidence of phone messages between people suspected of being involved in the cocaine drug trade” in the country.

Investigators said mobile phone evidences name people and places including time and dates about the activities of the cocaine drug syndicate operating out of Port Moresby with connections to a “North Asian Networks”.

Investigators said the syndicate knew and was planning for the arrival of the “black flight” however, the absent of the “load master” on that fateful day resulted in miscalculations of weight which impacted on take-off (plane crash).
Investigators said the load master was absent on that day because he was escaping arrest after the husband of a woman had laid an ‘extra marital affairs’ complaint with police against him.

In a Post Courier front page story on August 11, 2020, Prime Minister, James Marape has promised PNG that he “will leave no stones unturned” in the drug investigation until he uncovers those involved and bring them to justice.
The Prime Minister warned drug syndicates that PNG was not the place for them to ply their trade and the government will do everything in its power to ensure the country and its people are not exposed to dangers of cocaine.
Having being briefed, the Prime Minister is now challenged to decommission the Yamasombi investigation team in their stead because “he (Yamasombi) is directing the (cocaine) investigation in the opposite direction”.

“Having looked at the digital evidences so far and read media statements by CoP Manning, ACP Yamasombi and Police Minister, Bryan Kramer, it seems, all three men are compromised.

“ACP Yamasombi is at the helm of the drug trade security and also heads the police investigation. He is directing the investigation in the opposite direction”, a highly confidential brief to the Prime Minister read it part.

Upon Yamasombi’s advice, the K200 million worth of cocaine seized by police in late July has been sent to Australia “on the basis that PNG doesn’t have the capacity and capability to properly analyse this exhibit”.

The investigators brief to PM also highlighted that “the recent death of Jenelyn Kennedy at the hands of Bhosip Kaiwi and otherl similar incidents are fuelled by cocaine sold on the streets in Port Moresby.

“Senior public servants working in the departments (named) are responsible, as they imported these drugs, resell to various runners and dealers and when consumers take these drugs it creates mayhem and chaos in society”.

The police brief suggested to the Prime Minister that the National Intelligence Organisation (NIO), the Defence Force Intelligence Unit (which has names of soldiers involved in cocaine trade) be part of the new independent joint investigations team on the cocaine trade syndicate operating in and out of PNG. 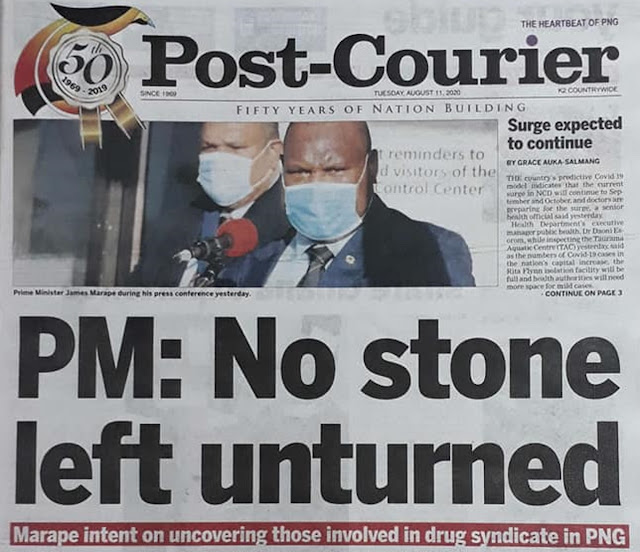