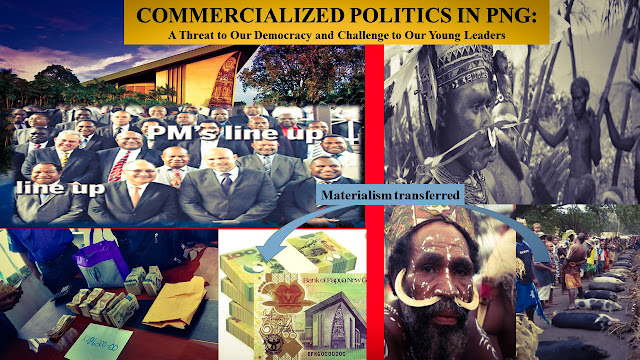 If you ask any typical PNG Politician how much it costs him (or her) to be elected into parliament, they’d say it’s in the Millions! It is in the millions and the millions they spend is perhaps 10 x more than they’ll ever earn through their legitimate salaries.  And I sometimes sit down and ask myself; if a MP’s net salary in 5 years is going to be K1m for instance, why would he/she spend K10m - K20m to get into that office? How do they do Cost-Benefit-Analysis and what would be the ROI (Return on Investment) for their massive K10 - K20 million kina investment into politics, or rather elections?

I suppose there must be something that we do not see; but I presume you all see (or know) ‘what it is’. And that ‘what it is’ is that they have taken that political office out of its operating domain called Democracy and customized it, or in other words “ethicized” it. And “Ethnized Politics” is the newly invented formula for looting (maybe invented by scientists in the Parliament… lol), thereby answering the question on ROI for politicians! Words like Cronyisms, Favoritism, and Loyalism have been born out of “Ethnized Politics” in PNG, and I know you can complete rest of the story using these words.

The idea of “Commercialized Politics” in PNG is the function of “Ethnized Politics”. Remember that materialism has been the yardstick (or tape measure) for measuring leadership in Melanesia. When one had a lot of pigs, wives, big land area, and one who had physical stamina to go for fight - has been deemed leader in our society. And consciously or subconsciously, believe it or not - materialism is the same yardstick we are using for political leadership in PNG today though it ought not to be that way. This phenomenon has forged politicians and their people into a symbiotic relationship – a relationship that is for mutual benefit! Our people have been made to allow their political leaders (key words: ‘made to’) to be in those positions of power and acquire as much as they can on the understanding that periodically, their loot (stolen money) will be shared with them. And that is the intersecting point between Commercialized Politics and Ethnized Politics!

[Side Note: So, from whom do they loot to feed who? Reminds me of Robin Wood but this is slightly opposite; they are robbing our poorest mass to feed their stupid followers. They are robbing Peter in Telefomin to feed Jack in POM!]

And can we blame our people partly for this? I think the idea of Commercialized Politics crept in because democratic-political-tone was not set rightly in the day one. Democratic Politics was not demystified properly that it did not adequately displace the Materialism Leadership in Melanesia. And subsequently, our people have been conditioned to fall prey on Commercialized Politics thinking that leaders are those eternally pregnant men, driving flashy cars and carrying money bags around. Or our people have been misguided to believe that leaders are those people with countless Board Room Experiences, corporate tycoons and with “Sir” titles. Or our people have been conditioned to believe that our leaders are those people who buy them guns to fight, fund their haus-cries and again buy pigs for compensation.

But at what cost is this Commercialized Politics taking a toll? We have used the wrong yardstick to measure political leadership and our withering democracy is the ultimate casualty! And we cannot continue to let this continue. PNG MUST redefine her destiny! We must demystify the political leadership again. And we will do it!