The recent appointment of National Airports Corporation (NAC) Acting Managing Director/CEO Rex Kiponge aka Timothy Kaipal as Managing Director /CEO on Friday 3rd of December 2021 by the NAC Board chaired by Rowland C Abaijah is illegal because it did not follow the legal processes and procedures under the Regulatory Statutory Authorities (Amended) 2013. Any appointment of CEO of a State-owned entity must follow the RSA Act and this was not done.

The purported appointment is highly questionable because the vacancy was not advertised and PSC was not involved to shortlist any candidates and finally Kiponge was not appointed by NEC. This is a serious departure from due process and legal procedures prescribed by law.. According to law, the procedures prescribed by the RSA Act are mandatory and therefore must be followed otherwise the Managing Director & CEO appointment is illegal and null and void.

In Kiponge's case the NAC Board through the Special Board Meeting chaired by Abaijah has bypassed the entire mandatory procedures under the RSA Act as follows;
• Vacancy and position were never advertised by the Board of NAC.
• Because there was no advertisement, no applications were submitted by persons interested and qualified for the position.
• The Public Service Commission (PSC) did not receive a list of 5 candidates to screen and consider including Mr. Kiponge’s application.
• The Civil Aviation Minister was not provided with a shortlist of 3 candidates from PSC for his consideration including Mr. Kiponge’s application.
• No submission was made by the Civil Aviation Minister to NEC for consideration and appointment which included Mr. Kiponge.
• The Head of State has not executed an instrument of appointment for Mr. Kiponge’s appointment.

In making this flawed decuson the NAC Board chaired by Abaijah illegally usurped NEC's powers and hijacked the entire appointment process. The NAC Board does not have the power to unilaterally appoint the MD & CEO of NAC. The power of appointing a CEO is solely vested with NEC and the
Head of State by virtue of the RSA Act. Kiponges appointment is tantamount to a hijacking of our system of governance and which act as safe guards to ensure there is proper checks and balances so that credible people are appointed to high offices.

Kaipal aka Kiponge’s appointment represents a clear and present danger and threat to our National Security in terms of the deliberate hijacking of legitimate processes that are in place. A large part of “Taking Back PNG” means taking PNG back from these kinds of illegal acts which undermine our systems of governance.
It is imperative that NEC must come clear to address this issue and act decisively to reverse this illegal act before irreparable damage is done to NAC in terms of administration, management and operations. This illegal appointment has created a legal vacuum in the office of Managing Director and CEO thus exposing NAC to untold liability from contracts or agreements or official documents currently being signed by Kiponge. 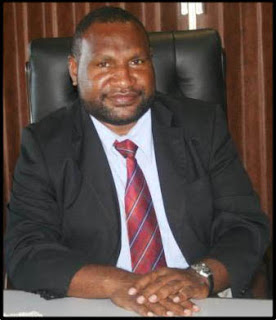