This is in response to  the media statement by NiuSky Pacific Ltd that appeared in the dialies on the 31st of December 2021. (ATTACHED BELOW)

Firstly how can NSPL tell the public that these are unsubstantiated and defamatory allegations when no one has independently verified this allegations yet? It would have been better if a completely neutral person such as an auditor or an investigator is engaged to carry out an audit first of all to confirm whether this allegations are true or not.

Secondly, this press statement has not been formally authorized for release. The name and tittle of the person endorsing the press statement must be written on this notice. The fact that it doesn't have a clear endorsement throws more dark than light here.

Thirdly, the normal practice would be that when allegations of such nature arises, be it on social or main stream media, public domain or anywhere else, the most ethical thing to do is for the management to step aside and allow investigations to be carried out right away, to prove or disprove these allegations. If NSPL management is serious about good governance, they should immediately step aside and let the investigations happen. Failure to establish an independent investigation will only shed more dark than light onto the message in this press statement.

Further more, having very robust and very stringent processes is a good thing, but it is one thing. Every other organization too has that in place. However, it doesn't prove anything. The crutch of good governance, transparency and accountability is seen in the execution of complete adherence and compliance according to the rules of the book. Press statement cannot prove a point. Only audits and an investigation carried out by a completely independent body is necessary given the magnitude of the alleged transactions.

In addition, another point is that why is the management of NSPL being adamant in trying to find out who spread the information online? They repeatedly kept saying that they will try their best to find out those who did that in this press statement? Why? Can they themselves simply ask the appropriate authorities to go over to NSPL and carry out audits instead of waiting and trying to find fault in those whistle blowers? Their actions now goes to show that they are trying to supress, intimidate and harass anyone who is trying to speak up. That's not good governance. That is toxic and shows the management has no clear effort in trying to clear NSPL from these allegations but to try to make people pay for raising such issues and concerns.

Finally, NSPL is a state owned enterprise. It is owned by the state on behalf of the 8+ million people of Papua New Guinea. It is not owned by a private citizen nor is it a private organization. Therefore, the people are entitled to know how K20+million is spend for landscaping project alone. Considering the timing of the tender (during the height of the coronavirus pandemic) of this landscaping project, an independent investigation must happen and the management of NSPL that preaches good governance must sideline itself and allow investigations to happen so that facts can be established properly. If there is nothing wrong then they can proceed to apprehend the so-called whistle blowers. However if there are evidences of abuse of office, fraud and other activities that does not conform to good governance then people must be held accountable for their actions.

Only an independent investigation is needed now, not such press statements. 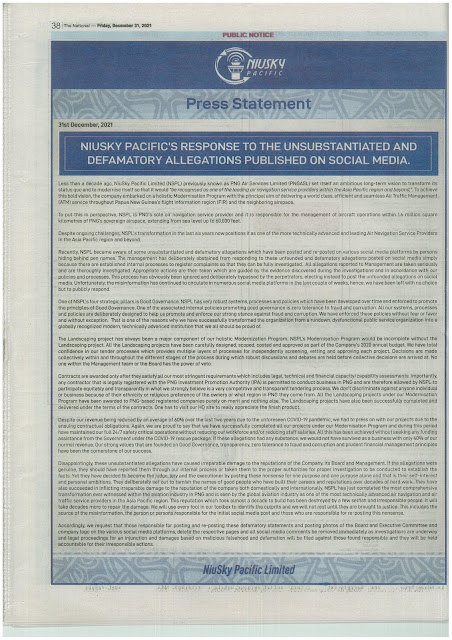