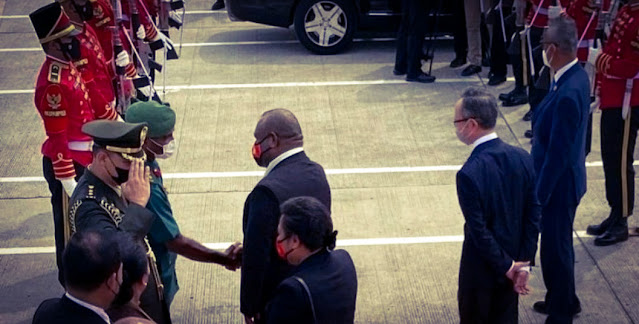 by BONNY KAIYO
Prime Minister James Marape justified the K5 Million official State visit to Indonesia. It was in the national interest to do so as he defined it.
Read. Here:https://m.facebook.com/story.php?story_fbid=4796563377138173&id=765439466917271
West Papua is the last bastion of the free world. The Independence struggle forms, and gives rise to aspirations by indigenous Papuans to one day enjoy the promise of freedom promised by the free world.
The Dutch left without completing the mission. Decolonisation of the former Dutch colony is taken for granted by all members of the international system who enjoy a ' free world.'
Key Points:
(1) Indonesia is a ' democracy' and therefore part of the ' free world.'
(2) West Papua issue remains to be addressed by Indonesia.
(3) Ukraine - it is part of the ' free world' so the US called for the major economies of the West to stand up for Ukraine.
Russia's invasion of Ukraine on 24 February 2022 caused the White House to call for unity among major economies on the need to stop Vladimir Putin.
US President Joe Biden held three days of emergency meetings with allies of the G7, European Council and NATO, and a visit with U.S. troops in Poland, and then a meeting with Polish President Andrzej Duda.
Biden, who took office last year after a violently contested election, vowed to restore democracy at home and unite democracies abroad to confront autocrats including the Russian president and China's leader Xi Jinping.
Putin's Feb. 24 invasion of Ukraine, which Russia calls a "special operation", has tested that promise and threatened to inaugurate a new Cold War three decades after the Soviet Union unravelled.
Joe Biden is understood to have delivered a “significant speech” on Russia’s invasion of Ukraine on Saturday after arriving in Warsaw.
Biden and Duda were expected to discuss Warsaw’s wish for more US troops bolstering Nato’s eastern flank, as well as the idea of an international peacekeeping mission proposed by the leader of Poland’s ruling party, Jarosław Kaczyński.
US diplomats have voiced scepticism about the idea, which Russia’s foreign minister, Sergei Lavrov, has criticised as “very reckless”.
The move by the US President Joe Biden was to confirm that the ' Free World' stood for democracy.
Read. Here:https://www.theguardian.com/.../joe-biden-visits-poland...
4. PNG Prime Minister James Marape is making the official state visit to Indonesia.
5. It is driven by the country's foreign policy objectives especially with Indonesia in a bilateral partnership to promote mutual interests, and fulfill the international best - practice as members of the international system in a friendly neighbourhood.
6. Indonesia's occupation of West Papua since 1960s may be interpreted as aggressive.
7. Russia is seen or defined as aggressor, and demonised in the same way although the 24 February 2022 full - sake invasion is termed by its military as a ' special operation.'
8. PNG supports the Australian position on Ukraine/Russian War so shares the US call for the West to stop Russian President Vladimir Putin.
9. Similarly, Indonesia is reminded to let go of West Papua, also?
10. Prime Minister James Marape will challenge himself to raise the issue of West Papua with his Indonesian counterpart President Joko Widodo as to the international best practice in addressing West Papua.
11. He could refer to the US House and Senate deliberations so far on West Papua.
Read. Case 1. 1.https://www.congress.gov/.../house-event/LC6562/text...
And, Case 2. https://www.asia-pacific-solidarity.net/.../need-persuade...
Prime Minister James Marape is clearly backtracking on MSG, PIF, and ACP resolutions on West Papua as an international issue.
Perhaps.