WHY VOTE FORMER MPS WHO DELIVERED NOTHING? 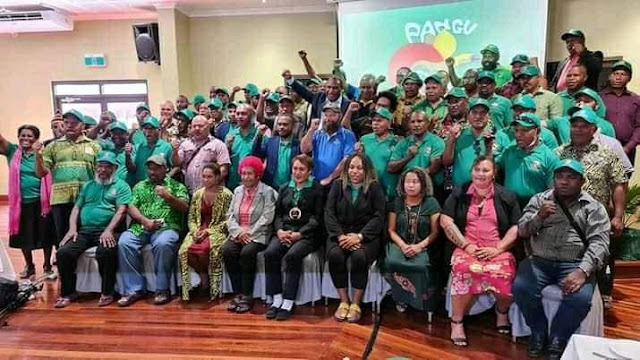 by VINCENT MOSES
This is a perplexing question that boggles my mind when I sit down and think about it. The question becomes more of a concern when I see these former failed MPs being endorsed and supported by well established political parties such as PANGU, NA, ULP, URP, PNC, PNG PARTY etc.
The question I ask myself is this. Whose interest is the party representing? Is it the interest of the people or their own selfish interest？
Having been involved with a few political parties during elections I am sad to admit that political parties are more concerned about candidates who they see as having a good chance of winning so that they can add to their numbers and be in a position to be called on to form government. They don't necessarily endorse the best candidate who sometimes has to run as an independent.
The fact the former MP was a failed politician who failed to deliver any tangible projects for his electorate is hardly of interest to these self serving political parties. All they are interested in is numbers, so many go with former MPs who already have an established voter base.
This term of Parliament has opened the eyes of many Papua New Guineans as to real service delivery and Development when first term and relatively new MPs in the likes of Hon Dr Lino Tom, Hon John Rosso, Hon Rainbo Paita, Hon James Donald, Hon Pila Niningi, Hon Elias Kapavore, Hon Walter Schnaubelt and late Hon William Samb to mention a few have brought real development and service delivery to their Districts and people.
It makes you question the logic of old former non performing MPs wanting to contest elections again. Whose interest are these former MPs trying to serve? Some had 5 or 10 years or more and FAILED miserably to deliver! Yet they have the guts to raise their hands for reelection and guess what? They are endorsed and supported by leading and well established political parties!
In my electorate of Wewak Open, God willing and I have the opportunity to campaign for the candidate I support I will have no hesitation to publicly tell people NOT to vote for the "HAS BEENS". Those who have been in the system and done nothing except fed their bank accounts and served their personal and business interests.
PLEASE PNG LET'S MAKE A PACT AND LET'S EDUCATE OUR VOTERS NOT TO ELECT ANY FORMER OR CURRENT MPS WHO HAVE DELIVERED NOTHING IN 5 YEARS OR MORE INTO THE NEXT PARLIAMENT!
Insanity, as they say " is doing the same thing over and over and expecting different results"
Let's vote in more Dr Lino, Rainbo Paita and John Rosso and their likes so PNG will see true change and Development.
----///----