Hela to Form a Formidable Team in PANGU Party 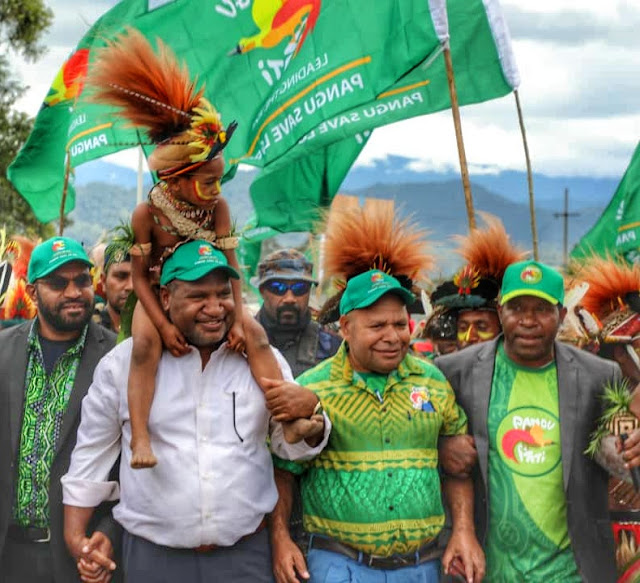 So much has been left to be desired for PANGU's hasty election victories in HELA. Tari Pori, Komo Hulia, Magarima and HELA Regional. The highly contested question is; Is the United Resource Party Member elected Hon. William Bando triumph a genuine win for the Party? There are a lot of unanswered questions floating around. Why are 12 boxes disputed not counted? Why is the newly elected Member without even consulting his URP Party Leader William Duma suddenly moved into the PANGU camp?

Zooming down and widening the space surrounding these election victories in HELA, it is noticeable that the aim of Prime Minister James Marape is to form an immovable HELA team. Who is William Bando? MP Bando is the maiden Provincial Administrator for Hela and was instrumental in building HELA to where it is today. He is a household name and a big Kwila in Hela, if he loses, he has the potential to divide Hela and cause instability in Hela politics.

The win for Koroba Kopiago is undeniably for the official Pangu candidate Mr. Boppy Yupiyupi. He is a young intelligent lawyer and a vibrant leader. If the 12 disputed boxes are counted, Bobby is indisputable to come home as the victor. He humbly accepted the fake defeat because the decision descended from the highest echelon. Pangu used URP as a decoy in Hela. Why? If PANGU wins entire seats in Hela, it will be a clear rigging of elections in Hela. Immediately after the declaration of William Bando, he speedily fused with his Hela brothers in the Pangu camp.

Now let us shift from Hela to the Nation’s Capital. Hela is really desperate to beef up the Hela mobs in Pangu because loyalty and trust are rare commodities, especially in politics. Port Moresby North East is now led by a Tari (Hela). Mind you, in a metropolitan city like Port Moresby, no one wants to elect someone from an origin where attitude is a nightmare and horrendous, even an ethnic group that is not a dominant force in North East election histories. Andapanga (Tari) candidate currently leading in North East has left a lot to be desired.

Counting for North East has been suspended last night (28/07/22), an urgent petition by incumbent MP John Kaupa to count the 9 disputed boxes is now before the Electoral Commission to make a decision. John Kaupa the official Pangu candidate who became an MP and broke the Commonwealth Nations’ record of joining most political parties within a single term of Parliament was already tagged as a person who has chronic trust and loyalty issues. Pangu knows very well that he is a mere bad choice, again he is just another decoy. However, seeing the line-up of candidates from the top 10, most of those candidates are of Simbu origin of which John Kaupa is one of them. The prospect does not seem promising for the lone Tari. Therefore, it is pre-empted that the Returning Officer will surely receive a directive from the highest to count those boxes only to increase Pangu’s chances of winning a seat in North East.

Even for the NCD Governor seat, we should surely expect frequent interruptions and disruptions to the counting processes because PANGU has a particular interest. One of the most performing governors Hon. Powes Parkop, even a Prime Minister material is on the top vendetta list. Pangu’s ultimate aim is to take over NCD and the City Authority. What is so special about the National Capital District Commission (NCDC)? NCDC is a goldmine, corporate taxes are tunneled into NCDC coffers monthly in millions of Kina. The Governor is the last authority on NCDC financial affairs. Pangu targets to take over NCDC via its decoy tactics in order to flex its muscles to lobby for the PM seat in the ensuing days and weeks.

The beautiful people of PNG living and working in NCD never anticipated to surrender their ultimate and supreme power on the land in the wrong hands. We have already witnessed enough, that without political powers, lawlessness, land grabbing, chaos, threat, and intimidation is very tense and uncontrollable in the nation's capital. Armed them with political powers and we are all doomed. The city and the nation are praying for divine intervention and we hope for a change in the government and the city.