Showing posts with the label Pacific Games
Show all 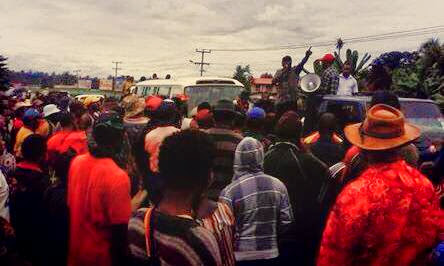 by STEVEN ANDRE   CALL TO STUDENT PROTESTS As the country is plagued by the consequences of Prime Minister Peter O’Neill’s economic mismanagement and corruption, it has now reverberated to places that no developing country would dream of –the education sector. NO MONEY FOR TERTIARY INSTITUTIONS To start with, the Government does not have the money to drive the commencement of this academic year. As was revealed by the Office of Higher Education recently, the Higher education needs K45 million to kick-start the schooling year and there appears to be no indication on the availability of those funds. Given the shortage of cash and the competing interests, the last thing O’Neill would want is for the students to take it to the streets in protests. UNEXPECTED INCREASE IN GPA The increase in GPA benchmark for scholarships was never communicated to the students last year so as to incentivize the students to worker harder to pass it. The students had a legitimate expe
Read more 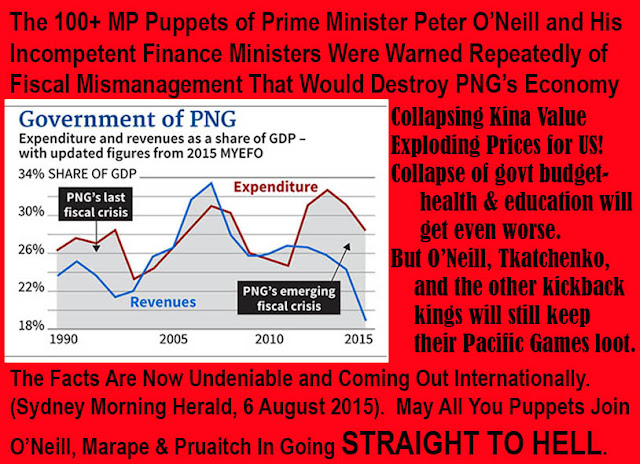 by JACK G WAUGLE Peter O'Neill and his out of control government have been running what has been a functional dictatorship.  There is no opposition and nearly all the MPs we elected proved to be docile puppets who spoke not a word of protest or concern, so focused were they on getting their DSIP and other development monies from the PM which in turn, was what they reckoned was their key to getting re-elected.  Hardly ever did nationalism come first or concern for PNG.  There were warnings after warnings about the out of control, loan fuelled infrastructure building for the Pacific games especially, a gigantic waste of money that all has to be paid back with interest.  Made all the more wasteful because of the built in kickbacks to Tom, Dick, Harry, and oftentimes the Chinese themselves.  So many people on the social media just didn't get it.  Maybe the warnings of pending doom all looked like a dreamland, but again and again the evidence was presented:
Read more 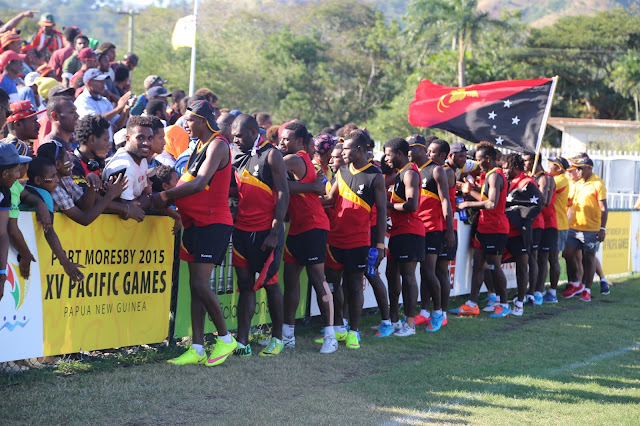 by JONAH IRUM Well, well, well; The Pacific Games are over. Every good thing must come to an end but the walk of life is all about moving on. The excitement and the achievements of the event is now history. When we beat farewell to our wan solwara wantoks the environment in Port Moresby is beginning to slowly adjust into its normal way of life. For the rest of PNG it is business as usual. Since the so called spectacular opening ceremony through to the closing ceremony PNG once again reaffirmed its position as the big boy or bikpla mangi of the Pacific region. The announcement by the Governor General to render assistance to Tonga as the host nation for the 16th Pacific Games come 2019 is yet another commitment from the bikpla mangi besides the financial assistance it rendered to Fiji during its National Elections and to Solomon Islands recently. Anyway, many of us especially the Port Moresby citizens will share many fond memories of the games. The people to people
Read more

POST ANALYSIS OF THE 2015 PACIFIC GAMES ON PNG'S ECONOMY. 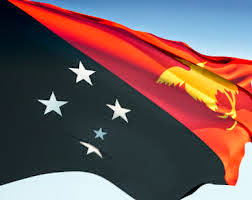 by SAM BASIL MP, Deputy Opposition Leader The Opposition have always been critical of how Papua New Guinea’s (PNG) economy has been financially mismanaged by the O’Neill government and we still believe this, when the 2015 Pacific Games has placed a further financial burden on PNG’s economy. As Deputy Opposition Leader, I do not question that all those associated with the 2015 Pacific Games, held here in PNG, should be acknowledged for a successful event given the short time span to organise; credit must be given to all these professionals, volunteers and sponsors for their commitment and determination. But the reality check needs to occur when the Pacific Games have left PNG’s shores and we are reminded about the recession we are currently in, and the loans that the O’Neill government have exposed PNG to; both issues will be strongly denied by the O’Neill government through their media propaganda announcements. What the O’Neill government won’t tell you, is that most major s
Read more
More posts