Showing posts with the label Waigani Club
Show all

The Germination and Spread of Corruption in Papua New Guinea: An Unfortunate Combination of Three Prime Ministers 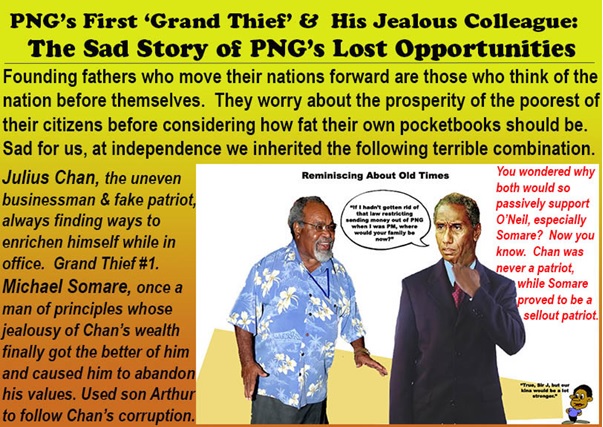 by A NATIONAL RESEARCH INSITUTE STAFF MEMBER Three Prime Ministers including the Father of PNG, Sir Michael Somare, have, over the past 40 years, effectively congealed to destroy what could have been a bright future and equal opportunity for the people of Papua New Guinea following independence.    As such, the noble ideals articulated by Somare and other members of the legendary Bully Beef Club during their many gatherings prior to Independence, and articulated in the Constitution's Six Directives, were never fulfilled and today are essentially abandoned.     PNG's sad progression downwards has produced its current state of rampant corruption.   Like Nigeria, like Mexico, like Indonesia, all fabulously wealthy nations in terms of natural resources, the wealth has gone nowhere useful in PNG.    PNG drags the bottom in global rankings today in terms of how little meaningful integral human development has occurred for the majority of its population. Thus far, the adv
Read more
More posts