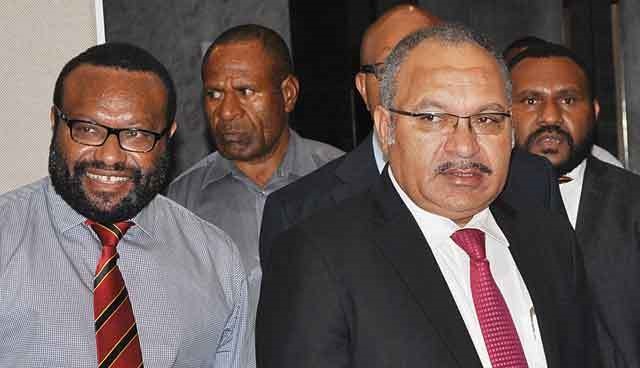 The last two weeks have been epic...a 'house krai like' gathering was staged by highlanders (mainly Ialibu-Pangia) directly opposite Crown Plaza and the gates into the hotel were blocked off by 5 doors and 10 seater Toyota troopers.
Residents at Toguba Hill got terrified by the presence of village warrior looking men (all fierce looking) and some even took off their shirts under the scorching sun.
That is how the outside of Crown Plaza, where Prime Minister, Peter O'Neils PNC and Coalition looked like.
INSIDE THE HOTEL WAS MUCH DIFFERENT.....IT WAS COOSSY AND ROMANTIC...THE FIJIAN WAY
The Member for Kagua Erave, Wesley Raminai and MRDC Managing Director, Augustine Mano (who are both PNG Fijians) played the lowest and dirtiest jobs of being pimps for the Crown Plaza Camp.
Raminai and Mano flew in young Fijian women (12 were seen at one stage but hotel staffer said there were about 20 or so) and asked them to service the MPs at the Crown Plaza Camp. Some of the ladies where so young and pretty for most the Ministers and MPs who were old enough to be their grandfathers.
"Ya, that dog old man Simbu Minister....he was really going crazy like a dog and carried the lady even inside the lift...I got scared and stopped the lift on the wrong floor and went to 6th floor using the fire exit"; said one single mother who works at the hotel.
Authorities should inform the Fijian Embassy in Port Moresby to locate those girls and also investigate the duplicity of representation of Fiji in PNG....illicit representation. Or also check if the entry of those young ladies amounted to Sex Trafficking and make appropriate complaints with appropriate authorities in Suva and Port Moresby.
Shame on the Member for Kagua Erave, Wesley Raminai and shame on the Managing Director of MRDC, Augustine Mano for exploiting young Fijian girls.