DEFIANT ISAAC LUPARI AND DAIRI VELE TO PM MARAPE AND DEPUTY WHO ARE YOU? 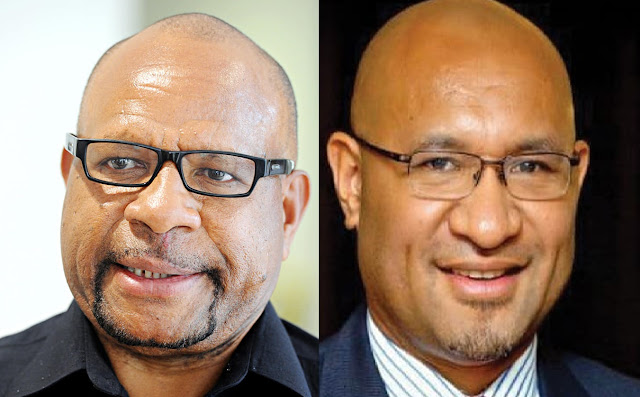 by EMMANUEL PLANG
A week ago Deputy Prime Minister Hon. Davis Stevens has questioned the Chief Secretary to Government, Mr Isaac Lupari on the reasons for the recall of cheque paid to Lower Koiari Landowners.

The response by Lupari that the decision to pay was made by the previous government and that the current government will review this decision with the landowners before paying them again unnecessary and sounds fishy.

The response by the chief secretary is a total diversion of truth, insubordination, abuse of office and abuse of established protocols. The decision to pay the Koiaris came to his office through an NEC Decision 356/2013 establishing a Ministerial Committee on Koiari Sustainable Development Package chaired by Minister for Commerce and Industry, Hon. Wera Mori. The NEC Decision is based on a Court Order OS 742 of 2015 directing the government to establish a task force to review all Koiari benefit package claims properly before paying. Included in the orders, among other orders, is the order to Establish a proper ILG for interested landowners of Sirinumu, Narime and Omani clans. To these orders, the only landowner clan that complied with all the court orders and registered an ILG is the Omani Clan, called "Rouna Omani Incorporated Land Group."

The state Ministerial Committee headed by Minister Wera Mori approved the payment of K5m to the landowners of Lower Koiari, Rouna Omani ILGas they have fully complied with the court orders. A cheque of K5m was paid by Treasury in December 2018 and was picked up in January 2019 to be deposited. However, before the cheque was deposited, Finance Secretary Mr Dairi Vele and Chief Secretary Mr Isaac Lupari recalled the cheque in January 2019 again.

The Chief Secretary is also confused here when he said that the cheque was recalled due to the fact that it was approved by the previous government and that the new government will review it before paying again. The fact is, the cheque was picked up by the Koiaris to be deposited in January 2019 and recalled in January 2019 again. The New Marape Steven Government came into power in May 2019. How can he (Lupari) justify this? He kept the recalled cheque for 3 months until the new government came into power. This sounds fishy.

The NEC authorised the body to facilitate the Koiari Sustainable Development Benefit Package is the Ministerial Committee headed by Min. Wera Mori. They have sanctioned the payment after Rouna Omani ILG complied with all court orders. Who is Mr Isaac Lupari and who is Mr Dairi Vele to question the superior powers established by the government?

Their actions are nothing less than that of Defiance, Insubordination, Abuse of Office, Abuse of Process, and Extortion to receive bribery.

Otherwise, there is no reason for them to further frustrate the Rouna Omani Landowners of their rightful Sustainable Development Benefit Package of K5m with unnecessary delays.

It is now time for the Prime Minister Hon. James Marape and Deputy Prime Minister Davis Stevens to Discipline the Corrupt Secretaries in the likes of Lupari and Vele.