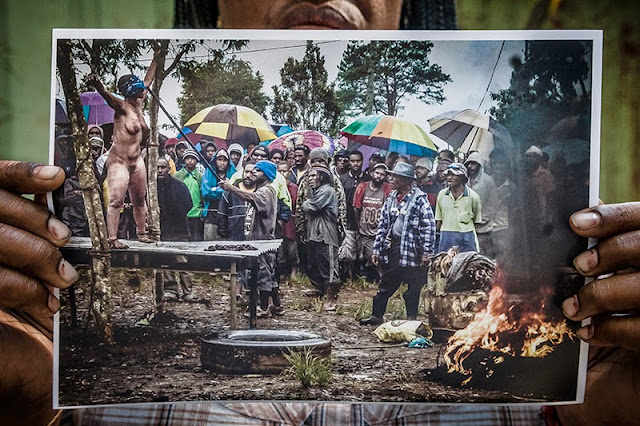 by CASPER DAMIEN
The reawakening of the ancient belief in and practice of sorcery and witchcraft is one of the post-independent development issues. Although sorcery has been recently (2014) outlawed in Parliament, it has not been effective and the information of the repelling of the sorcery act has not been really disseminated and descended to the bulk of the population in the rural areas. Sorcery now becomes a very frightening thing in our community and individual life. Almost everyone relate misfortunes and deaths to sorcery and there is now a tendency to points fingers at someone or accuse others for sorcery. This trend is currently bad in PNG and it can also hinder development and progress in general.

Development as we have seen so far refers not only to the economic or material progress of our people but also the spiritual, cultural, social and political aspects. Papua New Guinea is one of the unique countries in the world that has some of the best development goals and principles that are enshrined in the highest legal authority of the country: the Constitution. As Bernard Narokobi, a constitutional lawyer and a member of the Permanent Consultants to the Constitution Planning Committee (CPC), stated, “…the goals of our society ought to be enshrined in the constitution as the guiding stars that would steer our helmsmen and women as they took our national ship through uncharted waters, come storm, come peace,”

Although we have the best National Goals and Directive Principles enshrined in the National Constitution our national leaders and their subordinates at the top bureaucratic level have failed us successively thus leading the country into disarray. Rampant political corruption has become a daily occurrence which ultimately destroys the honesty and the moral integrity of the nation’s leadership. As Dr. Luke Apa, a Catholic Priest and a Lecturer at Divine Word University stated, “…corruption within the political and bureaucratic leadership is one of the major factors for the stagnation of development, the frightening depletion of the natural resources, and the unequal distribution of national wealth and the rise of crime and poverty in the country”. Commissions of inquiry after commissions of inquiry have been established every year to investigate and to prosecute those who are involved in the corrupt practices but the outcomes have seldom been successful.

The fast and current political scenario has left the rural population (85%) miss out on many of the basic government services. They lack access to good roads, bridges, schools and health services. They are denied of having equal opportunities to participate fully in national development and governance, and they have very low levels of cash income per annum, which is the most common indicator of poverty used for international comparisons.

Poverty and other socio-economic factors have driven our people further to engage in many unfavorable activities to make ends meet. The increasing growth of sorcery, cult and witchcraft practices and the related accusations and killings today are some of the symptoms of political ignorance and government inaction by not providing basic services to rural areas.

In order to address these issues effectively it requires the input of the leadership of this nation. This country needs a strong, transparent, reliable, and credible leadership to take ownership of the situation and to bring the nation forward in its development goals and objectives. Rephrasing the Governor for National Capital District, Honorable Powes Parkop, in his weekly opinion in 2009 stated that “a nation can have the best written constitution in place or ideal political system, promulgate the best civil and criminal code etc, but these (…) will not save a nation if the leadership is poor or lack quality and integrity.” He stated further that, “it is quality leadership that will ensure these systems, laws, code and processes work well to deliver a quality life and better future.”

Such leadership is greatly required at all levels of our society. From the village level up to the districts, provincial, NGOs, churches, corporate sector and the top bureaucratic levels, especially the department heads and their subordinates and most importantly the political leadership of the nation. From these collaborative and concerted leadership efforts from different sectors of our society will bolster social capital and enhance community solidarity and stability. This will empower community leadership and bolster community development activities which will then enable communities to take ownership of their lives and their activities.

Community empowerment is a formidable tool toward achieving socio-economic developments in rural areas that will help to alleviate people from their economic hardships rather than forcing them to resort to sorcery, cult and witchcraft practices.