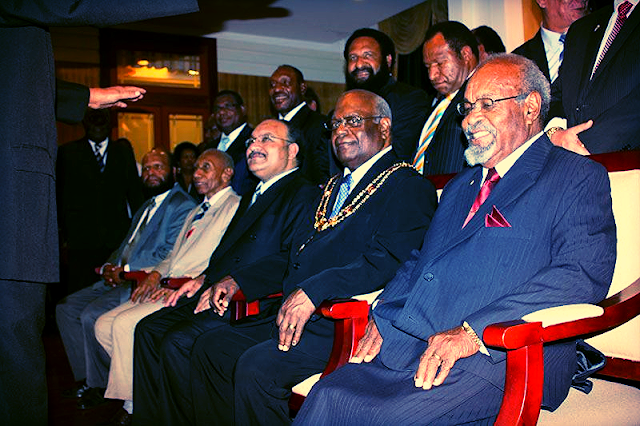 IS PETER O’NEILL GOING TO DO BETTER THAN SIR MICHAEL SOMARE?


Prime Minister of Papua New Guinea Peter O’Neill and his PNC party are becoming more powerful than ever in the political history of this small country as more and more MPs from other political are abandoning their parties to join the ruling party and others are lining themselves up for the PM to marry them into his ruling PNC party. Any possible chances of a successful vote of no confidence against the PM are now seem unlikely, at least for now.

The movement of MPs from other political parties into the major ruling party is not happening for the first time in the history of this country. When the government of Sir Michael and his NA party were in power, we had seen the same influx of MPs from smaller and other political parties into the ruling party. They had the same reason of political stability and also other nonsenses such as to benefit from development funds.

Because of such overwhelming support for Sir Michael Somare and swelling of MPs for NA, the old man had 10 years of political stability from 2002 to 2011 when he was toppled by the current PM Peter O’Neill and his mobs in a coup like power struggle in 2011.

During the time of Sir Michael Somare, the country had budget surpluses of billions of Kina and the foreign reserves were high. These were driven by high prices of our minerals and commodities. At one stage, Somare’s government had 10, 000 trust accounts opened with commercial banks and billions of kina were parked there. Today, where are those billions of kina disappeared to as nothing is on the ground to show for those funds?

Can we trust them this time?

The current Prime Minister Peter O’Neill was part of the former NA government holding key ministerial portfolios including most of the top ministers in the current government.
But what is the guarantee that they are not going to rob the country again?
Under Somare and NA, billions of kina from the revenues of minerals and commodities were disappeared without traces.

Sorry it’s too late, PNG. They had their dirty hands already on the PNG LNG revenues.
They are getting loans in billions (such as K6 billon Exim Chinse Bank loan and K3 billion UBS loan). They are getting their cuts from these loans. This is a fact too. This is what they have been good at doing for the last 40 years.

While they are still alive they want to benefiting as much as they can from the PNG LNG revenues so that the future generations will continue to suffer and repay back those loans and still remain poor.
Sooner or later we will find out that again have nothing to show for the PNG LNG project and its billions in revenues.

These are the same MPs that have been robbing the country for the last 40 years.

VOTE ALL OF THEM OUT IN 2017.
TRUST ME ONCE, NOT TWICE. I GUARANTEE, PNG WILL NEVER BE THE SAME AGAIN AFTER THEM.
Australian Investment. Papua New Guinea Exim Bank NA Peter O'Niell PNC SOMARE stability