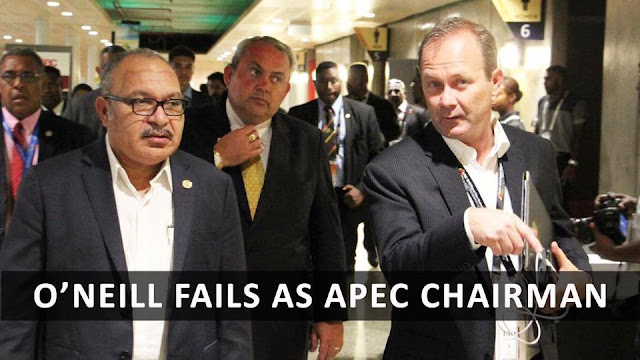 While Post Courier published the front page headline "Yes We Did It'! the rest of the international media reported No we didn't!
For the first time in APEC Summit history, leaders of 21 Nations were unable to agree on a formal written declaration.

The purpose of APEC is to enhance economic growth and prosperity for the region and to strengthen the Asia-Pacific community.

The Guardian reported O’Neill denied the failure to agree on a declaration was a humiliation for his poverty-hit country, which was hosting the annual gathering of the 21 nations for the first time.

So how did it go so wrong?

Look no further than the Chairman of APEC Prime Minister Peter O'Neill, while in PNG politics where he divides others in the pursuit of his own personal interest this time round it back fired on him.

Never in the history of APEC has the host country made the blunder of staging a State visit at the same time. In this case O'Neill knowing the divide between China and US the two largest APEC Members, he foolishly made the decision to use the opportunity to afford China special treatment.

Any idiot in Politics will tell you that you don't host 21 World Leaders and make it a one member show.

PNG will now go down as a stain in APEC history, the whole event will only be remembered for the Maserati scandal and a summit dominated by a war of words between the US and China.

If there was one positive statement to take from the whole event it was US Vice President's announcement that the US has committed K1.2 Billion to tackle corruption in our region. One can only assume the US are putting O'Neill on notice your days of stealing money from your people are over.

I've always said PNG's biggest development issue isn't major infrastructure or trade but corruption, there is no point making wealth if someone else only ends up stealing it.

This is certainly one spectacular failure on O'Neill's unsavoury political career- adding to the already long list of failures - failed health and education policy, failing economy failed election and now a failure as Chairman of APEC.